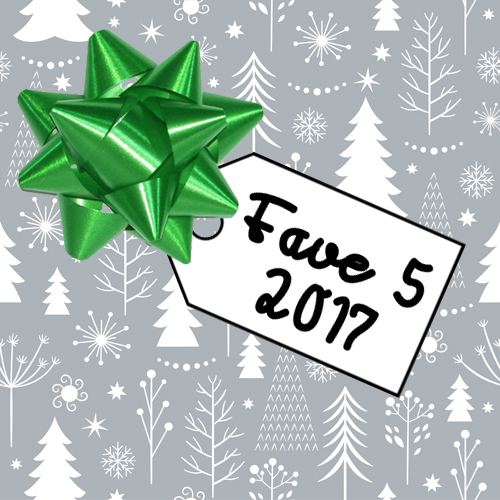 Since I began writing fiction, and because my day job also requires a lot of reading and writing, I don’t get to read for simple pleasure as much as I used to. But I manage a couple books a month or so. Last year, I posted a list of my top five reads, and readers seemed to appreciate it, so I thought I’d do it again and maybe get into the game and make it a yearly thing.

My favorite genres as a reader are science fiction and fantasy, and since I’m steeped in romance as a writer and beta-reader, my list of pleasure reads tends to lean away from the genre I write in. But I read a few wonderful romances just for fun, and I’ve included my favorite here.

So, let’s do this from bottom to top. In each heading, I’ve linked the title to its Amazon page:

I am a fan both of Neil Gaiman (I’m going to be teaching a senior seminar on his work next semester) and Norse mythology (as evidenced by my Viking romance series, The Northwomen Sagas), so I had Gaiman’s Norse Mythology on preorder from the moment it was available, and it didn’t disappoint. Gaiman retells prominent Norse myths in his typical style, managing to balance irreverence and respect, humor and pathos on a thin blade of perfection.

#4: The Butterfly Project, by Emma Scott

Oh, I enjoyed this so much. Zelda and Beckett are wonderful, deep, interesting characters, and their individual stories pack as much emotional punch as their romance. The writing is graceful and true, and I LOVE LOVE LOVE the way Zelda’s comic frames and shapes the story. I’m an avid comic and graphic novel reader, and I found the integration of the comic here seamless and interesting–and thematically powerful. Highly recommend this, if you haven’t already read it.

You know how I just said I’m an avid reader of comics and graphic novels? I’ve been following about a half-dozen current titles since their first issue (one, I’ve been reading for about ten years now), and Saga is hands-down my favorite of these regular reads. Last year, Volume 6 made my Fave 5 list, and Volume 7 might be even better. This series has everything–gorgeous art, characters to care deeply about, a unique, epic story, and some deep themes and ideas. At the heart of this story are two powerful people in love, and the small family they’ve made together. If you are a reader of comics, you really should be reading Saga. You won’t be sorry.

#2: The Stone Sky, Book 3 of the Broken Earth Trilogy, by N.K. Jemisin

The Stone Sky is the final book of The Broken Earth trilogy. I’ve been reading this series since last year, and each and every book is a favorite. The first two books (both Hugo Award winners) deserved two places on my list last year, but since this is very much a trilogy, one story in three books, I wanted to wait to recommend it until the end, to be sure Jemisin stuck the landing.

She stuck the hell out of it.

This series is absolutely fantastic, and my favorite SFF read of the last ten years. Jemisin’s world-building takes my breath away, and her characters are deep, diverse, fascinating. They are real people, sometimes prickly, sometimes loving, sometimes brave, sometimes weak. Flawed and wonderful. You will come to love the ‘villain’ as much as you love anyone.

It is not a typical hero’s journey kind of SFF story at all, though it is about a journey, and there is a kind of world-saving thing as a goal. Strong arguments could be made to consider it either science fiction or fantasy. I consider it both.

The first book is The Fifth Season.

This book has been #1 on the NYT list pretty much since its release, so I’m sure you’ve heard of it. Let me add my voice to the thunderous chorus of praise.

I’ll start by saying that I know I’m seriously in the minority of genre readers, but I generally hate first person present POV. Like, unless I have other reasons to proceed, I will decide against a book on page one of a sample that’s written in first present, because I really, really, really don’t like the characters telling me what’s happening while it’s happening. I always wonder why they have time just then to narrate their lives. Shouldn’t they be focused on what’s happening? I want characters to sit me down and tell me a story. So first person is fine in past tense, but third person past is absolutely my favorite POV (note that that’s what I write in, lol).

Now, though I think it’s the POV that’s most often done poorly, I have indeed read some amazing books written, at least in part, in first present (The Handmaid’s Tale, for one), and if there is a compelling reason for me to push through my resistance (a book I’ve been assigned to read, or one a friend has written, for instance, or one that everyone is talking about and my curiosity overcomes my distaste for the POV), and the story is good enough, the writing strong enough, I might eventually get wrapped up enough to forget the POV and just enjoy the story. But it’s usually a struggle to get over that hill, and I need a reason beyond the book itself to keep going.

I say all that because THUG is written in first present, and I struggled with the POV for a good while. I kept trying to put it down because I couldn’t get into it. But E V E R Y O N E  I know and respect had read and loved this book, I’d read countless articles about its importance and worth, and I teach YA literature, so I was considering it for my syllabus. I pressed on. And then, at one very important scene, I crested the hill. More importantly, it became very clear that first present was the exactly right POV for this story. The reader needs to be there while things happen. In the moment. The emotional impact is nearly overwhelming.

This is an important book. It’s a necessary book. But more than that, it’s a brilliant book. It tells a powerful story with nuance and compassion, and it is beautiful.

And yes, it’s on my syllabus.

(Aside: The Broken Earth Trilogy is written in part in first present, too. That’s another read that was so good I overcame it. And it’s another read for which, in retrospect, I see that the POV choices make the book stronger.)